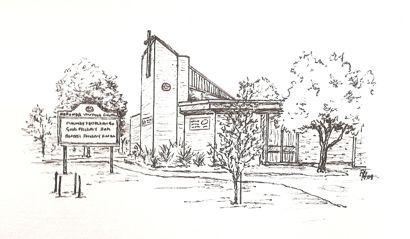 The Uniting Church in Australia is the nation’s only truly indigenous mainstream Christian movement. It stands with the people of this land in their search for spiritual life, justice, identity and dignity.

The Uniting Church is non-hierarchical and is governed by interrelated councils.

Nationally, the Uniting Church is represented by the Assembly – that’s the name of the council of church members that meets every three years and the name of the national administrative offices, mostly based in Sydney. The head of the Assembly is the elected President.

The state councils of the church, which meet annually, are called synods. Synod is also the name for the church’s state administrations. The elected head of a synod is a Moderator.

And presbyteries are composed of local churches – the congregations. The congregation is regarded as the foundation council of the Uniting Church.

All leadership positions in the Uniting Church are open to ordained and lay men and women.

The Uniting Church has a diverse range of congregations which may:

The Uniting Church is a multicultural church with worship regularly conducted in 40 different languages and diverse cultural styles.

The Uniting Church celebrates important milestones in life, such as marriages, funerals, baptisms and thanksgiving for the birth of a child.

Uniting Church chaplains touch the lives of millions of people each year. Its chaplains work in:

UnitingCare Australia advocates for justice, equity and participation of all with other non-government and community service providers to government.

UnitingCare agencies touch every corner of the Australian community serving many millions of Australia and their families each year.

Aboriginal people are encouraged to explore their Aboriginality and to look for ways to express Christian faith in cultural ways. The church recognises the rights of Aboriginal and Torres Strait Islander people to introduce structures and ways that better serve their communities and provide their own leadership and direction. The Uniting Aboriginal and Islander Christian Congress is the national agency that exercises oversight of ministry with Aboriginal people within the Uniting Church.

The Uniting Church stands for justice

The Uniting Church is committed to social justice, valuing the uniqueness, equality and dignity of all people. The Uniting Church seeks to work in solidarity with people in and beyond Australia who experience injustice, oppression, or abuse of their human rights. It also works for justice in social and economic structures. Some issues addressed:

In each state there are theological colleges working with universities providing theological education for both lay and ordained people from basic certificate courses to post-graduate degrees. Theological courses are available by distance education through Coolamon College. Resources are available for work with adults, youth and children within congregations and public schools. Uniting Church schools provide education curricula and programs based on Christian values and some have boarding facilities.

The Uniting Church has partnership relations with many churches in the Pacific and Asia who have similar denominational traditions, through sharing resources, ministry, practical support, crisis relief and community development.

The Uniting Church is an Australian Christian movement. It shares with Australian people in the search for meaning, purpose and community in life. It is committed to justice and reconciliation between people. Through worship, sharing the story of Jesus, and service in the community we witness to the belief that life is most fully found in God.

Born in 1977, our movement is a result of the union of three older traditions – Congregational, Methodist and Presbyterian. People from these three Christian traditions were captured by the vision of a new Australian Christian community, one that could better witness to Jesus by being together rather than separate. This vision was so compelling and so exciting that they were willing to leave the traditions and ways of being church they loved, to establish the Uniting Church.

So we are both old and new. We are Australian, yet we share a faith in God that is held by people throughout the world. We seek to reflect the love, care and grace of Christ as the church has sought to do for two millennia, yet in a truly Australian way.

Our social justice advocacy work and community welfare services express our belief that God is committed to life now. It is our response to the Bible’s call to care for and protect the marginalised and vulnerable. Issues addressed include the environment, the rights and dignity of asylum seekers, the treatment and care of prisoners, inadequate gambling legislation, religious intolerance, multicultural/cross-cultural issues, fair employment practices, and much more.

The Uniting Church is also the largest non-government provider of community services in Australia. We achieve this through our community services arm, UnitingCare. This is an umbrella of more than 400 agencies, institutions, and parish missions throughout Australia. Areas of service include aged care; children, youth and family; disability; employment; emergency relief; drug and alcohol; youth homelessness and suicide.

A leading edge in our justice work is the Uniting Church’s efforts to bring indigenous and non-indigenous Australians together and to support the indigenous community generally. Reconciliation, land rights and indigenous leadership training are among areas in which we are engaged.

We do this primarily through the Uniting Aboriginal and Islander Christian Congress (UAICC). Established in 1985 as the indigenous arm of the Uniting Church, the UAICC is dedicated to seeking the spiritual, physical, social, mental and emotional wellbeing of indigenous Australians.

The Uniting Church recognises the pain and damage caused to our country’s native people through settlement and beyond. In 1997, recognising its past mistakes, the Uniting Church made a formal apology to the Stolen Generation. We participate each year in National Sorry Day.

Another clear focus of the Uniting Church is its vast work and presence in remote and outback Australia. This is particularly true of Frontier Services personnel and our rural congregations. Frontier Services is an extensive network of community services and pastoral ministries that has ministered to people in some of the most isolated places since the early 1900s.

The Uniting Church recognises most people in Australia live in cities and towns, where they face a range of complex challenges. We are as engaged in sharing life with people in urban frontiers as we are in the more high profile outback ministries.

Although we are truly Australian, we have an international conscience, particularly for people struggling in developing world situations. Our international mission personnel help us to share our faith on a global basis. We work primarily with partner churches in regions such as the Pacific, Asia and Africa. We share together in a variety of ways including Bible translation, prison ministry, evangelism, empowerment of marginalised groups, justice advocacy, exchange of personnel, peace-building initiatives in areas of conflict, and theological education.

In the spirit of uniting we:

Uniting Church congregations throughout the country are caring communities to which all people can belong. There are more than 2,200 of these with 243,000 members and adherents.

Congregations may have hundreds of members, or be tiny communities of a dozen people; be found deep in the heart of our cities, and in most isolated and outback towns.

They have many faces. There are older people and young, families and single people, people of one culture or many – 40 different languages are used in worship in the Uniting Church each week.

There are congregations that have existed for many years, and new and very different ones – café style churches, groups that find it better to worship on Wednesdays than Sundays, or who minister across a region rather than a local area.

While our congregations can be vastly different, each aims to embrace all people – to unite them with each other and with God. This is expressed in part in our having an open table for Holy Communion to which all baptised people are invited, welcoming children for baptism and being willing to marry those who are divorced.

Our congregations are communities in which people seek to follow Jesus, learn about God, share their faith, care for each other, serve the local community, and seek to live faithfully and with real joy. This is the kind of engaging church to which we belong.

A vision for the future

On the 22 June 2002, we celebrated 25 years of mission and ministry in the Australian community. There is so much to give thanks for and to be excited about.

As we celebrate it is also important to reflect on the challenges that lie ahead. According to national census data, more than one million Australians align themselves with our church. While millions more connect with other churches, there are many people who do not align themselves with any church. These two factors present us with a great challenge.

Even in the seemingly short space of 25 years, the shape of the Australian way of life has changed dramatically. The vast nature of this change beckons us to emerge with a renewed vision for the future, one that will show us how we might participate with God in bringing transformation in the lives of people who live in the very different world of the third millennium.

As a people journeying together we affirm our calling under God:

(based on statement from inaugural worship service 1977)